Incarnation of Vishnu as a Fish:

In the Hindu religion, Matsya (Sanskrit: meaning "fish") is the first avatar of Vishnu, the preserver god in the Hindu Trimurti (trinity). According to Hindu mythology, Vishnu appeared in the form of a fish during the epoche known as the Satya Yuga to save the totality of living beings (including humans) from a great flood.

This is a beatuifully crafted hollow amulet pendant is still in very good condition with decorative repousse and chasing. There is still remnants of the gold wash over the front of the pendant. The reverse side of the pendant is plain silver.

The pendant has a sturdy bale and comes with a long 61cm (24") - 2mm - high grade Indian fine silver snake chain.

The pendant has been tested for high grade silver 92.5% approx. 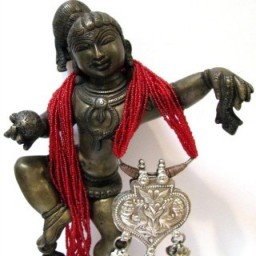