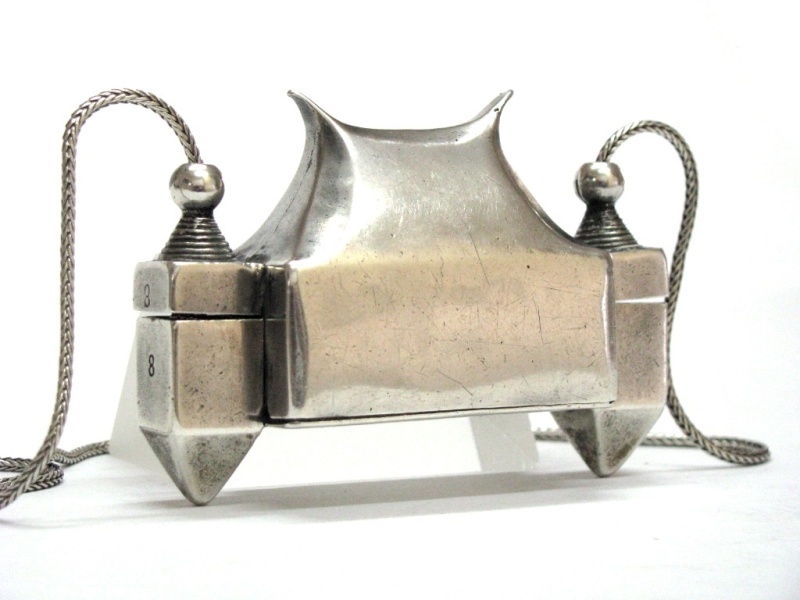 This lingam casket (ayigula) is in the form called chauka, in reference to its rectangular shape whose top cover rises upwards at opposite ends to tapering points meant to suggest a bull's horns, symbolic of Nandi the bull. Nandi is Shiva's primary vehicle who serves as the mount of Lord Shiva.

It has been made in two parts that are held together when the box is suspended from the chain.

The casket is made of solid silver with underneath chasing (although very faint) of circles and finals, and what I believe sectarian circles on one side of the two projecting rectangular sides, elsewhere is plain.

It does not retain its original chain - and now has a newer sterling silver replacement. The ends pass through the top holes in the upper balls and descend through the rectangle into the low half of the casket. Each chain end has an attached ring that engages a crossbar fixed in the lower casket half.

As a result the chain cannot be removed, and this arrangement also permits the upper casket half to slide upwards and ride on the fixed chain.

The lingam casket dates from the early c.1900's and has been very well preserved and used for the purpose for which it was made. It has an excellent patina and with contours softened and worn down by wear and use.

The container is designed to hold the sacred lingam stone which is used as a meditation device to allow the worshiper to concentrate on Shiva. In daily worship, the lingam stone is removed from its casket and placed upright in the left palm with the indented dot facing the worshiper who pours a water or milk libation over it with the right hand while reciting appropriate mantras.

Lingayats are easily distinguished from other Hindus because in most cases the lingam casket is visible on the body. Lingam caskets are worn by men and women over the should to one side, or hanging from the neck as a standard necklace. Cultivators wear it wrapped in a cloth tied around the neck. 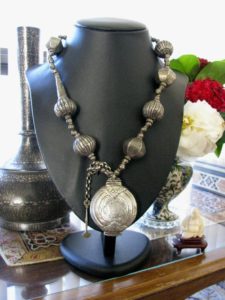